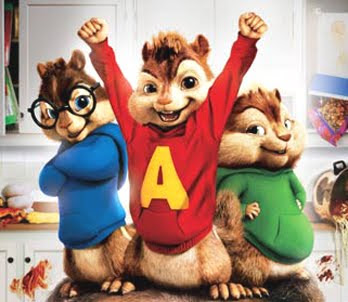 Never sure where I get my big ideas but after watching Emma (my 3 year old granddaughter) pack around a chipmunk from McDonalds, one of the girl chipmunks (her favorite), I thought "why not take her to the new chipmunk movie, I had wanted to see it too". That was what I thought anyway. I asked papa to go with us but he mumbled something about crazy, tired, can't... so to make it more fun for her I decided to take a couple more grannies. I gathered up my 4 year old granddaughter Adrianne and her 9 year old brother Austin and off we went to the movies. I should mention that ALWAYS ask about the potty before you go - and I did ask before we left but it is 28 miles to the show, that's a long way for a couple young ladies, what I forgot is to ask AGAIN before we went into the show. That was my first mistake, the 2nd to buy popcorn, drinks and candy too! Strike 3 - Drinks what WAS I thinking? (again forgetting the potty thing). After one spilled popcorn; 2 spilled drinks, one bag of candy rolling 3 seats down; one lost chipmunk (remember the loved one from above?) one lost jacket and two trips to the potty we really didn't miss to much of the show. Did I tell you that Emma ran up the stairs from a potty break faster than grannie could? She stood in front of the big screen yelling "grandma, grandma Debbie, grandma DEBBIE?" I tried to get her attention from the side but she couldn't hear, finally I knew that I had to sneak up there and get her, which I did. Now my silhouette isn't the best on a good day but my how BIG my butt looks when it blocks out the light on the screen. The laughter, did I mention that? Well the laughter - let's just say I was glad it was dark cuz my very red face was pretty bright! We now had made it through at least half of the show and I was sure that not much more could go wrong. Not so... the place was packed and two children decided they needed to squeeze past us to get to their parents sitting on the other side. Emma, AKA Miss Manners, says in a not so quiet 3 year old voice - "They didn't shay shorry grandma. Grandma they didn't shay shorry - they should shay shorry grandma." That brought on another round of laughter, not from the kid's parents (of course). She also mentioned to a young man that he should shit in his sheat and not in the aisle. Laughter again! Did I tell you that Emma has this little lisp thing going on where all her s' have a sh sound to them? When I got home and was laying in bed recapping my night I could only laugh. Maybe next time, grandpa WILL go!
'

Oh my Heavens! I seriously laughed til I cried! Shounds like it was a shight to be sheen...and heard!

Oh, Grandma! How funny! I love it. Out of the mouths of babes! Glad you got to enjoy the show, and the grannies!

Tee Hee! What a wonderful Grandma you are to take on the show with the three Grannies! Too darn cute, they are!

LOL!!! Memories made for sure! You rock grandma.