Today we celebrate Pokey's 16th Birthday. It is a milestone for our old puppy and with sadness we know that it is also his last birthday. Pokey was diagnosed with Addison's disease some 6 or 7 years ago. At that time he almost died, but some wonderful doctors were able to diagnose and treat his disease. They had actually sent him home to die but persistence on our part and many $'s later they were able to help him. As the years go by Pokey's health has slowy deteriorated. He always had a big and strong heart but recently he had some medical problems that has given him a big set back. Jeff keeps nurturing him, and as long as Pokey has the will to live, we will continue to love him, give him as much comfort as humanly possible and let him live out his last few days, maybe weeks with the people he loves. Here are some of Pokey's favorite things in life. 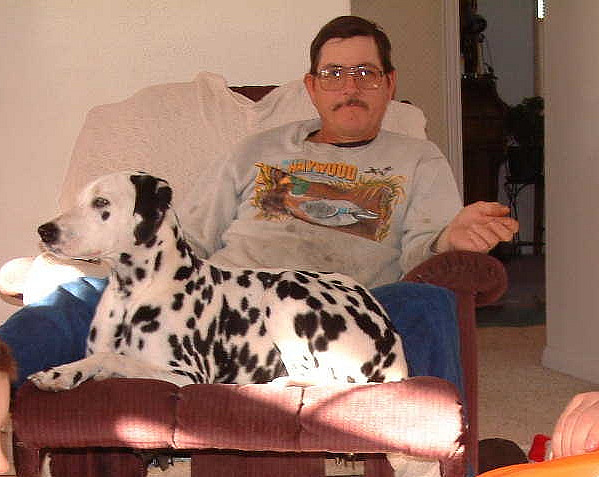 Pokey's favorite place to be was on the end of Jeff's chair; he basically wore that chair out by jumping on it. He also loved to sleep smack dab in the middle of the bed between us. When he was a puppy I told Jeff there were two things that he couldn't do with his dog that I had given to him as a Christmas present. He couldn't call him Spot and he couldn't sleep on the bed. Well he was given the name "Pokey Dots" and he didn't sleep on the bed, he slept IN the bed. 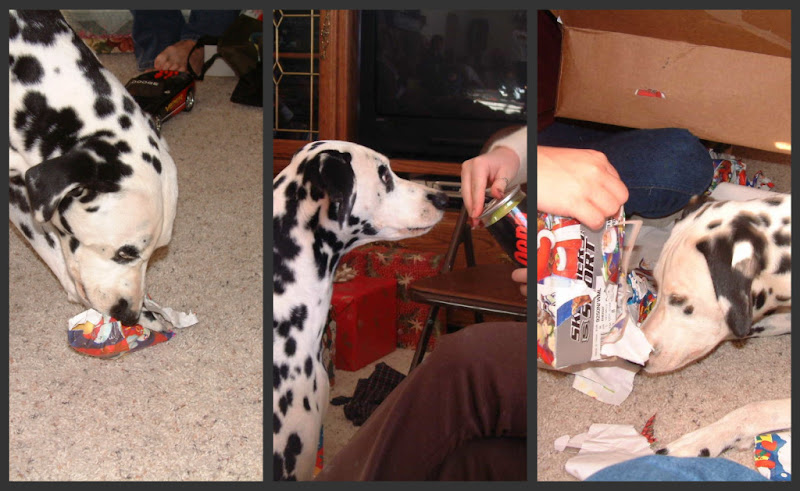 Pokey loved getting gifts. There was always a present for him on his birthday and always a present under the tree at Christmas time. These presents were always tennis balls because Pokey loved nothing more than to chase a ball. He would wear out the kids', Jeff, me, and anyone who happened to stop to visit by bringing that ball to be thrown. He could catch just about every throw until he got along in years. Even then he played and played catch. He played it so much that his little pads wore off the bottom of his feet. REALLY! 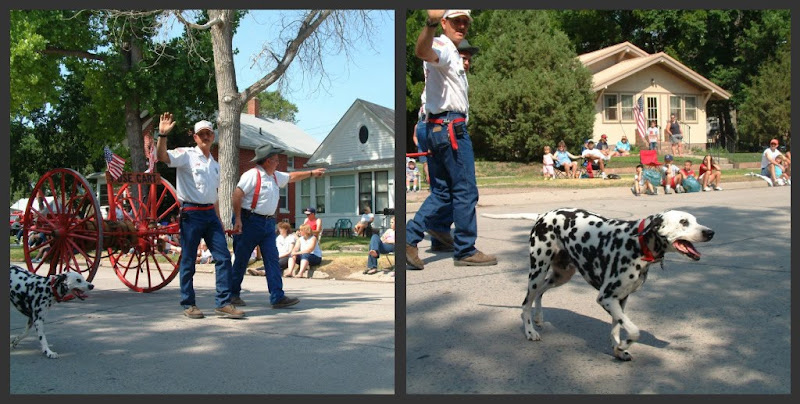 Pokey has always loved people and he was the official mascot for the Crawford Fire Dept. Not only did he ride in the fire trucks with Jeff and the firemen, he was also a MUST in the 4th of July parade. Everyone knew him and would holler for him to come visit. This wasn't just any ole fire dog, he had learned how to crawl on all fours when we said "Smoke" and to stop, drop and roll when we would say "Fire". He spent many years going to the schools around the area teaching the kids these tricks. Pokey even had his own column in the local newspaper where he would give weekly articles on fire safety. Our pup sure has had a good life and he has given us his BEST over the years. So today we say "Happy Birthday Poke - we LOVE you"
Posted by Debbie at 7:09 PM

Oh my goodness, I have tears in my eyes. God bless little Pokey. Wow, what a great life he has lived Deb. I hate to even think of the day when Justin & I experience that, losing a dog. Riley, our black lab, over the last year has gained so much gray around his mouth :( Makes us realize how mature he's getting. Now Katy, she's so hyper I cannot even imagine her aging. She's like Pokey, she'll play fetch 24/7 if someone will play with her, seriously!! LOL, I remember when I was 8-9 pregnants with Preseton, I'd sit in the lawn chair & she'd bring the ball to me & set it in my lap! LOL!! And she's SO competitive!
I sure wish I had met Pokey, who knows, maybe I'll get to. He's in my prayers tonight.

Wow Deb..that brought tears to my eyes..Pokey is a great dog and I remember lots of times being at the firehall with him there. :) Happy Birthday Pokey!

OH, what a sweet tribute! Happy birthday to Pokey.
Thanks for visiting today.

Pokey's been a part of your family for soooo long!! I am so sorry that his illness is affecting him so harshly. We're praying that his last birthday was a super one!