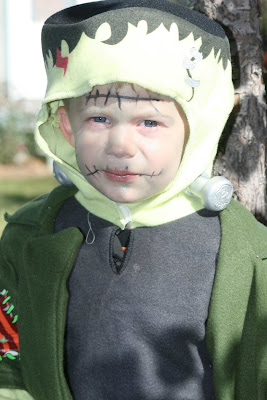 I went to the Halloween parade this year. How fun! I haven't been to one in a long time, but getting the grannies ready brought back many a memories from raising my own children. You remember those times don't you? Makeup on the white carpet; grease paint that had to wear off because it wouldn't wash off; a messy house; pulling out all kinds of stuff from the kitchen, your closet, the bathroom .............. just whatever it took to make that 'perfect' costume, you know the ones that would "WIN". I thought that was so important back in my day, my kids just wanted a bought costume, but NO, I had to drive myself crazy putting together what I thought was a the perfect costume. So now its 2008 and we are getting Jaxon ready for the parade. He has this cooler than cool Frankenstein costume and I did some artsy makeup on him and he was lookin' really great...until the B word came up, yep Batman! That was what he REALLY wanted to be, but with just 15 minutes until the parade we finally talked him into being Frank and just scaring Batman. The uncles gave him lessons on how to walk like Frank and we were off. EXCEPT we decided to put a costume on Emma and put her in the parade too. So off to Jeremy's to get the costume, aunt Daunee' was throwing it on Emma as we pulled up to the curb just a few minutes before the parade started. I have to admit there were some really cool home made costumes..........(I'm talking about you Becky) and some that were so adorable you just couldn't stand it and then some so inventive I wonder where they got their creativity. Anyhow here we go a parading down the street, Brandi with the little ones, me with the cameras falling off my shoulders and the family in behind cheering them on. First up was Emma in the 0-2 age group, those little guys were Oh so Sweet! And did she win..........yes she did - 3rd Place. So there goes the 'only the homemade costumes win' from my time ;0) Then Mr. Jaxon was up with the 3-4year olds. He didn't have a clue what we were doing with him but he did get to stand up on the trailer with his pals Meggie and Kyler so that was good. Did he win.....yes he did! He won the 'Scariest' division and that made him Oh so Happy! (unfortunately there wasn't a Bat Man to scare but it was great just to be scary). Thanks to many businesses, we then went Trick or Treating in the downtown area. I swear it was like a Norman Rockwell painting. Here was this beautiful, golden day with just the right temperature, a few leaves blowing in the street, the trees all golden and fall was all around us.  And then there were  these precious little ghouls and goblins  running up and down the streets in their costumes, not a care in the world.  I was in love with the day! It sure makes you appreciate the small town atmosphere that we have where kids can run into the stores/bars and get treats and everyone in town stops to talk to them. My hats off to Jess and her crew and all the businesses that made this possible!
Posted by Debbie at 4:23 PM

What a SCARY Frankenstein!