Things are finally starting to bloom since the weather has warmed up a little. We could still use some 80 degree weather to make everything a little brighter but then we would just need more rain and then it would be cloudy and cool again. Never a happy medium, no -  that isn't true April, May, Sept. & Oct. in our part of NE is usually just beautiful months. 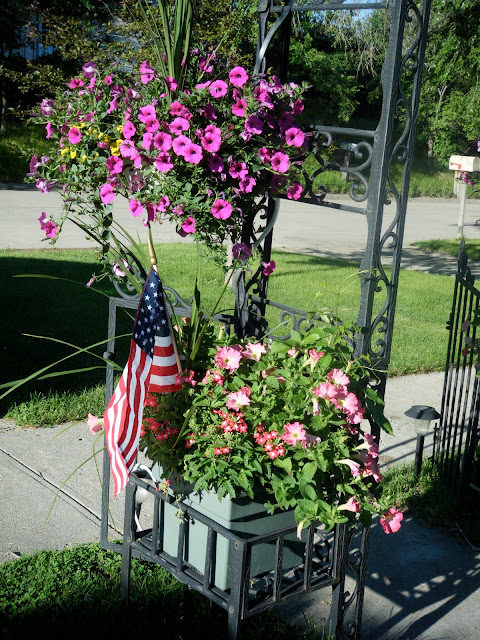 I started a lot of my petunias in my little greenhouse. Probably won't do that again, they are rather costly and it took them forever to get big. They are worth it though and I am really starting to see some maturity. 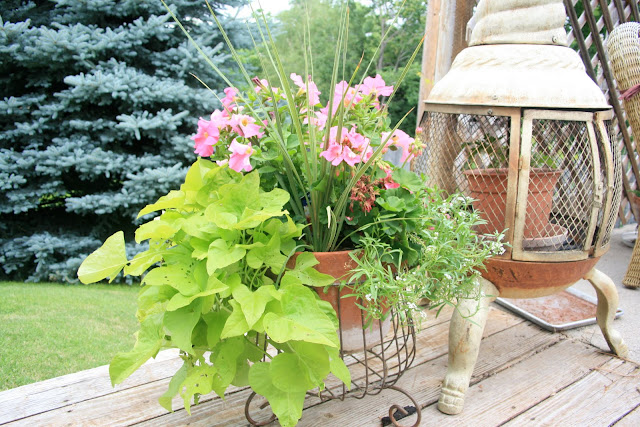 I love potato vine and have it growing everywhere. They all came from the same place and were all planted at the same time but some are doing so much better than others. Darn just looking at these photos reminds me that I still need to sand and seal the deck again. 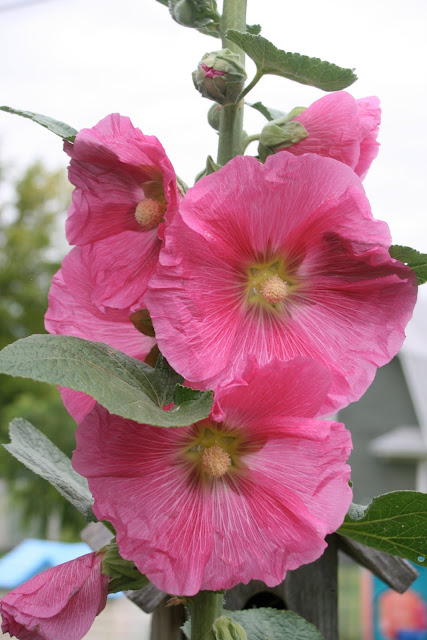 I just love hollyhocks. They are pretty much a weed in my garden popping up everywhere but they so remind me of my Grandma Norman so I love to see them. Anyone remember making dolls from the heads of the hollyhocks? 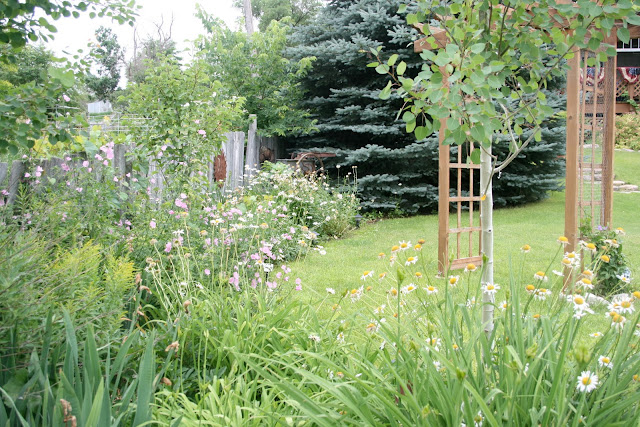 The daisies are pretty much done and since this photo have been cleaned up for their second bloom period. 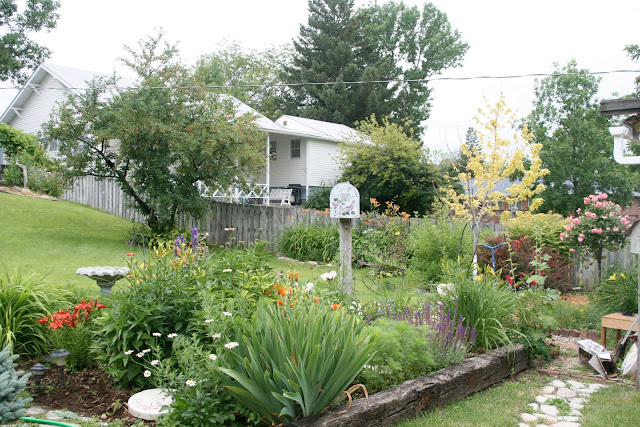 I am pretty much down to perennials in the flower beds, with just a few annuals. I miss my big grapevine and fence but the flowers are enjoying the extra light. My rose tree has put on another show and is just filled with blooms. 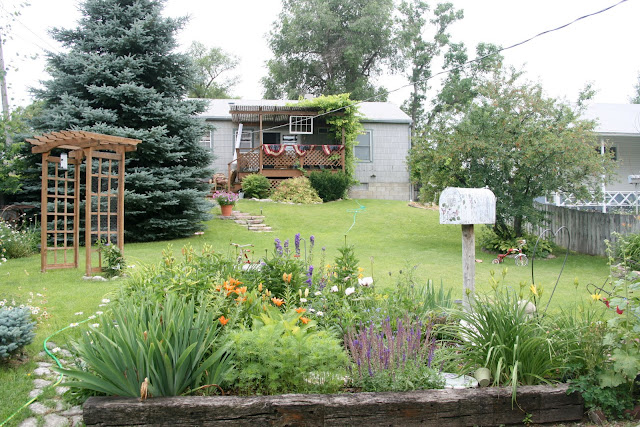 The railroad tie used to be part of the alley but after moving the fence I just kept it where it was, I want to replace it with a rock wall.Still collecting rocks - cuz I am cheap and won't buy them and in our neck of the woods there just aren't a lot of rocks. Darn! 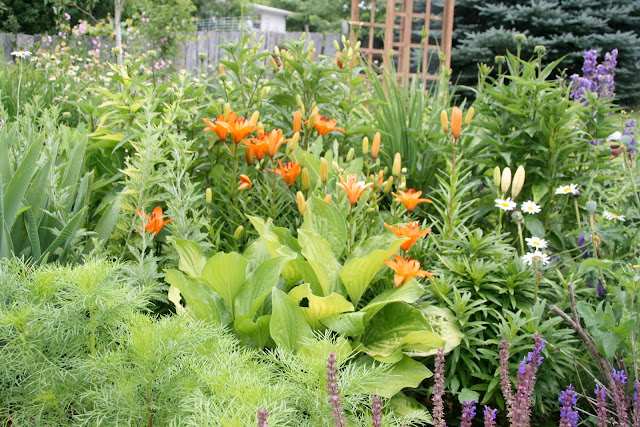 The lilies and hostas are starting to fill in all the empty places. I love lilies and wish I had hundreds of them in my yard. I had pictures of two different lilies and inadvertently deleted them when I was making a correction, so I will have to show them later I guess. 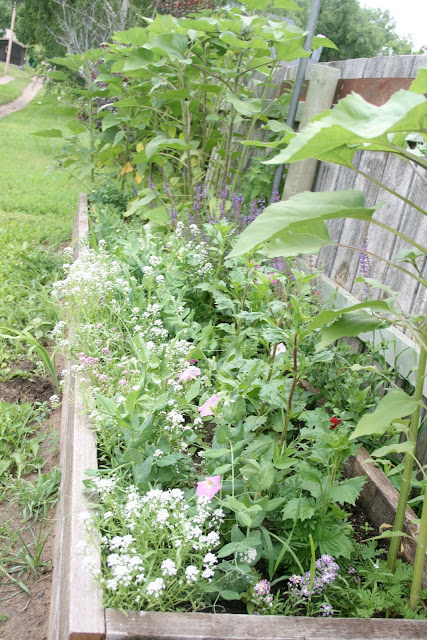 One of three raised flowerbeds in the alley, I needed more space to take care of perennial transplants so Jeff made me three boxes. This one is annuals - the one on the other side is my fall bed with sunflowers, mums, pumpkins and marigolds. 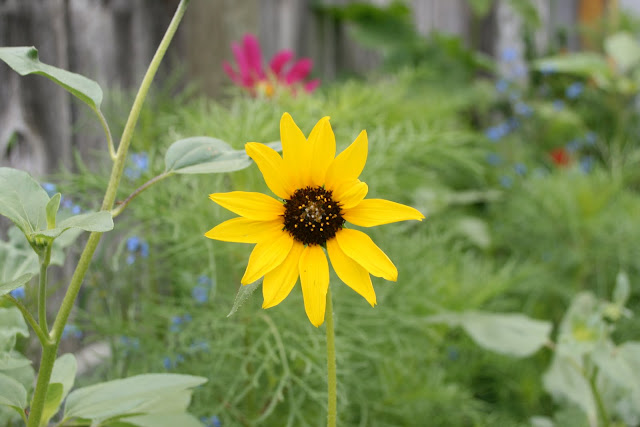 A simple sunflower came up in the one raised bed and I love them even if they are a weed. Makes my autumn heart pitter patter. 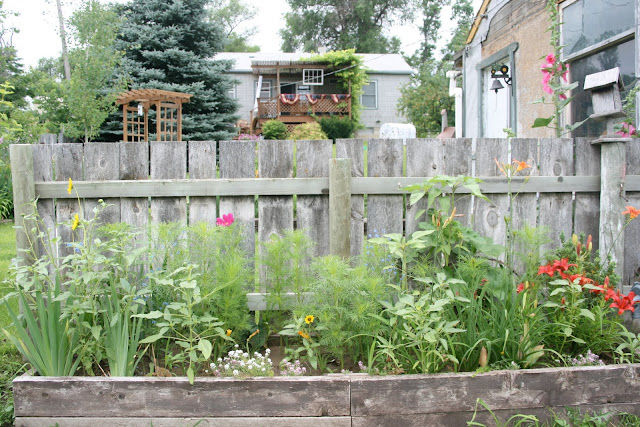 Overflow from perennials and annuals that I grew in the greenhouse. Some of the red lilies that were overflow. 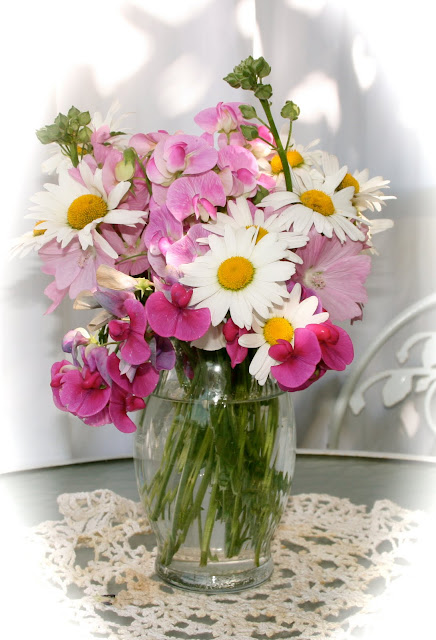 My sweetpeas and daises make such nice companions so I had to shoot a few different angles of them. 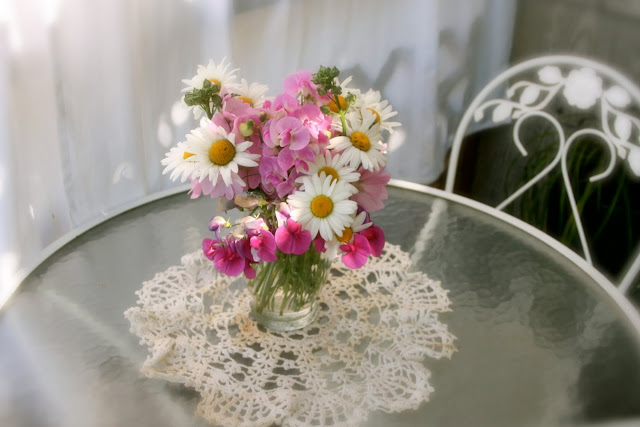 My little doily needs some soaking in some kind of whitening, but it is an outdoor accessory so it is always getting a little dirty. 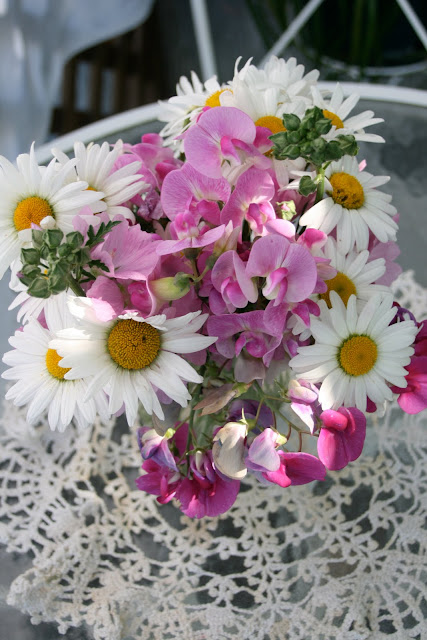 Up close and personal with the sweet peas. 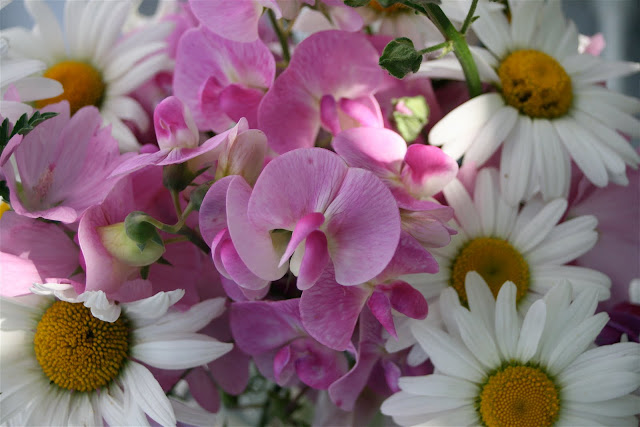 So tell me, or better yet show me what's blooming in your garden these days!!!!
Posted by Debbie at 1:45 PM